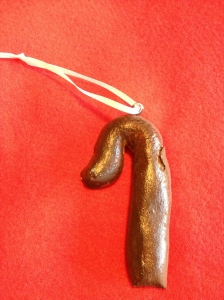 16 The Lord said to Samuel, “How long will you grieve over Saul? I have rejected him from being king over Israel. Fill your horn with oil and set out; I will send you to Jesse the Bethlehemite, for I have provided for myself a king among his sons.” 2 Samuel said, “How can I go? If Saul hears of it, he will kill me.” And the Lordsaid, “Take a heifer with you, and say, ‘I have come to sacrifice to the Lord.’ 3 Invite Jesse to the sacrifice, and I will show you what you shall do; and you shall anoint for me the one whom I name to you.” 4 Samuel did what the Lordcommanded, and came to Bethlehem. The elders of the city came to meet him trembling, and said, “Do you come peaceably?” 5 He said, “Peaceably; I have come to sacrifice to the Lord; sanctify yourselves and come with me to the sacrifice.” And he sanctified Jesse and his sons and invited them to the sacrifice.

Samuel was commanded by God to seek out the next king of Israel. Saul had been unrepentant in his sins, and so he lost the kingship and dynasty that were to be a part of his anointing as king. So Samuel went out to see Jesse and find out which of his sons God would choose to be king. As each of Jesse’s sons came in to meet Samuel, the prophet looked them over. Each time, he saw handsome men – strong men – who had the look of royalty. And yet none of these men were the future king of Israel. When none of the sons presented to him were chosen, Samuel finally asked Jesse if he had any other sons that hadn’t come to see him. Well, yes, Jesse admitted. One more: the baby of the family, the one relegated to tending the sheep out in the fields.

God had chosen this boy, David, to be king. David didn’t look the part of the king, though. He was still just a kid. Sure, he was handsome, but he was ruddy from being out in the fields all day long. He was a bit rough.

But God doesn’t see people the way we see people. He told Samuel to anoint David right there, and once again we read about a young brother of many being set apart for God’s purposes. The Holy Spirit came to David and was with him from then on.

How many times do we ignore someone or look over them because they don’t seem right for the part we need filled? Maybe we have someone in particular in mind to head up a project, and the person who volunteers isn’t who you had in mind. But perhaps it’s who God has in mind! Again, God doesn’t see people the way we do; he sees the hearts of men. God often chooses people to do His will that confound the world. We look at them and think Why would they be in charge of that? Moses had a speech impediment. Jacob was the younger son who loved books more than hunting. David is the kid brother to a bunch of soldiers, and he’s out tending sheep all the time. Even in recent history, we can see the same thing: Mother Angelica was a cloistered nun who started a media empire. Saint John Paul II was the youngest pope in hundreds of years (and not from Italy!) when he was elected pontiff. Joan of Arc was a farmer girl who couldn’t even read. St. Bernadette was a child who was so sickly that she barely went to school and was failing her classes. St. Juan Diego was a peasant who was visited by the Mother of God.

Again and again, God chooses people who are seen as weak by the world to accomplish some of his greatest tasks. This is precisely because when the plans succeed, He knows that those “weak” people will happily give Him credit, and it will be evident to everyone that it was His work, His guidance that accomplished the task.