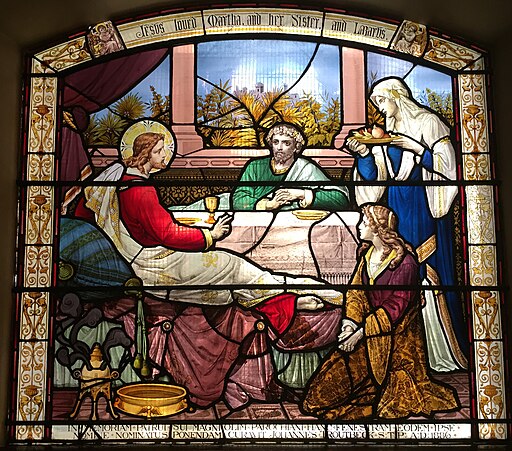 By Andrewrabbott (Own work) [CC BY-SA 4.0 (http://creativecommons.org/licenses/by-sa/4.0)], via Wikimedia Commons

The Gospel for the Fifth Sunday of Lent was about the death and resurrection of Lazarus, the brother of Mary and Martha. This family was very close to Jesus; they were some of His best friends.

Now a man was ill, Lazarus from Bethany, the village of Mary and her sister Martha. Mary was the one who had anointed the Lord with perfumed oil and dried his feet with her hair; it was her brother Lazarus who was ill. So the sisters sent word to him saying, “Master, the one you love is ill.” When Jesus heard this he said, “This illness is not to end in death, but is for the glory of God, that the Son of God may be glorified through it.” Now Jesus loved Martha and her sister and Lazarus. So when he heard that he was ill, he remained for two days in the place where he was.

…When Jesus arrived, he found that Lazarus had already been in the tomb for four days. Now Bethany was near Jerusalem, only about two miles away. And many of the Jews had come to Martha and Mary to comfort them about their brother. When Martha heard that Jesus was coming, she went to meet him; but Mary sat at home. Martha said to Jesus,  “Lord, if you had been here, my brother would not have died. …”

There are so many things to unpack from this Gospel story, that it’s difficult to know where to begin. But today, my husband caught something that he had never really thought about before.

The Gospel is clear: Jesus loved Mary, Martha, and Lazarus. He would visit them when He was nearby. Mary would sit at His feet and soak in his teaching. Martha waited on Him. They were dear to Him. And yet, in the sentence after reaffirming that Jesus loved this family, the Gospel says that He stayed two days more after hearing that Lazarus was deathly ill.

Our priest talked about Jesus waiting to resurrect Lazarus – that He waited because He wanted everyone to have no doubt that Lazarus was really dead. Jesus knew His Father’s plan for Lazarus, and He knew that there would have been some people who would have thought Lazarus was simply in a deep sleep if Jesus came just after Lazarus died and then raised him from the dead. So waiting this extra time was for the benefit of people who would have been slow to believe.

But Martha and Mary did not know this. All they knew was that Jesus could have saved their brother, but He didn’t come when they asked Him to.

And both sisters knew with every fiber of their being that Jesus could have saved Lazarus. “Lord, if you had been here, my brother would not have died.”

Place yourself at the scene. Lazarus might have been about the same age as Jesus. Perhaps his parents had died and he was left caring for his two younger sisters. When he met Jesus, he became fast friends with Him. Maybe Lazarus grasped Who Jesus Is. Maybe it was he who shared that information with his sisters, giving Mary a reason to make such a public repentance by washing Jesus’ feet with her tears. These were people who loved Jesus both as their Lord and Savior and as their dearest friend. Imagine the late-night talks they had, sitting up into the wee hours of the morning just to spend a little more time with Jesus. Laughing, joking, bearing each other’s burdens. Jesus came to this family and healed them, and they were never the same again.

And then, when Lazarus got sick, Mary and Martha put off calling for Jesus. “Maybe he’ll get better on his own. Jesus is so busy. So many people beg Him for His time…let’s just wait and see.” But Lazarus got worse and worse until, finally, the sisters could wait no more. Maybe it was Martha – All-Business, Take-Charge, Get-It-Done Martha – who sent the messenger to find Jesus. “I know generally where He is. He told us he was going to this area. Run! Go and get Him!”

And then the sisters waited and prayed and waited and held Lazarus’ hand as he died.

The messenger came back, but without Jesus. “He said He would come soon,” is all he could say. But it’s getting hot, and Lazarus must be buried, so the sisters mourn and prepare their beloved brother’s body for burial.

They have a funeral and a burial. They are still in mourning, still in tears. Everything in the house reminds them of Lazarus. The tears flow and flow and never seem like they’ll stop. Their extended family and friends have all come. All of them, except One. Only Jesus isn’t there. People come in and out, they try to comfort the sisters, but it’s so hard. Maybe some of the friends are starting to wonder why Martha and Mary and Lazarus believed in this Jesus. If He is the Christ, why didn’t He come? If He loves them, where is He?

Four days after the burial, someone on the edge of the village sees Jesus and His Apostles walking towards them. He runs back to Martha to tell her, and Martha jumps up and runs to meet Jesus. Jesus is still in the middle of the village area when Martha gets to Him. “Lord, if You were here, my brother wouldn’t have died.” How do these words come out? Choked with tears? Tinged with anger? Confusion? Or does she just break down and fall into Jesus’ arms and sob into His shoulder. “You could have saved him. You could have saved my brother! Why? Why didn’t You come? Why did Lazarus have to die?”

Jesus can’t help but be moved. He loves Martha. He loves her sister Mary. He loves Lazarus, even now. “Martha, do you believe I will raise Him up?”

And Martha does believe. She still believes, even in her pain. “Yes, Lord. On the last day. I believe that. Yes.”

But Jesus tells her, “I am the Resurrection and the Life.” Martha still doesn’t quite understand.

By now, Mary has heard that Jesus has finally come, and that He is in the village square talking to Martha. She, too, runs to Him, seeking comfort that only He can give her. Her entire family follows her, not sure where she’s going. When she gets to Him, her words to Jesus are the same. “You could have saved my brother!” And she breaks down sobbing again. Jesus embraces her, and the scene is so touching that the rest of the family who has followed begins to cry anew. The anguish of the two young sisters is heartbreaking. The family, though, is confused at the sisters’ faith in Jesus. Jesus didn’t come when they asked. Jesus didn’t save their brother.

And Jesus knows the family’s anguish. He sees their pain. As God, He knows the very depths of that pain. And in that moment, as He embraces his two friends, surrounded by their family, Jesus cries with them all.

Upon His request, they lead Jesus to the tomb. “He must be going to pay respects … maybe to pray,” they must think.

“Open the tomb,” He commands. Even Mary and Martha balk – it’s been four days since Lazarus died! No one opens a tomb four days after a burial! The stench will be horrible! When Jesus insists, they do it. The Gospel doesn’t say whether or not there was a stench, but I suspect that there might have been. Did the extended family start to really wonder about Jesus? They already were talking amongst themselves about His supposed signs – healing the sick, curing the blind – but that He failed to act on behalf of Mary and Martha. Then Jesus astounds them all by saying:

“Father, I thank you for hearing me. I know that you always hear me; but because of the crowd here I have said this, that they may believe that you sent me.”

And He calls out, “Lazarus, come out!”

I remember reading a story about a little boy who was challenged by an atheist uncle about this story. “Why did Jesus have to call Lazarus by name? Maybe it was a signal because they were faking.” The little boy, full of faith, said, “Because if He didn’t say Lazarus’ name, everyone might have come out!”

But here, Lazarus emerges from the tomb. No more stench. No more death. Restored to life, as Dickens might say.

Jesus had let Lazarus die, but He had a plan. Lazarus’ death was going to bring glory to God in some way. Martha and Mary trusted in that, though they didn’t expect their brother to be raised from the dead. They believed Lazarus would give glory to God upon the Last Day. They mourned, but held to their faith.

Where is God? What is His plan? When will this pain end?

Why does Jesus let Lazarus die?

I have no answers for those questions. I can only say that, even though it’s difficult, I know God has a plan. We don’t always know His plan, or understand where the good will be found when we are in aguish. Sometimes we just won’t know at all in this life what the purpose of our suffering was. Mary and Martha didn’t know what Jesus’ plan was. They suffered for days without knowing, without hearing from Him. They wondered for days where He was and why He didn’t answer them.

In His own time, Jesus answered Mary and Martha.

In His own time, God will answer us. And when He does, we will be able to look back and see the threads of His plan for good.

If you are suffering now, please know that I will be praying for you. If you’d like to leave an intention in the comments below, please do so, and I will bring that intention to Adoration this week.