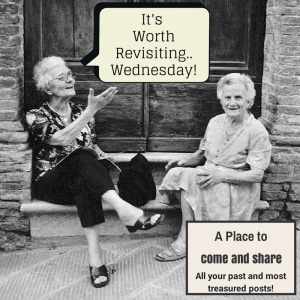 While looking for an older post to share, I came across this one from way back in 2006. I had spent a few years trying to do something extra, spiritually speaking, for Lent rather than giving something up. I have to laugh at the idea that I couldn’t imagine giving up meat for Lent at the time. I do see here that my strategy of giving up that thing that makes me cringe with fear was already employed, though. (As Lent approaches, I think of what I could do or give up, and if I react viscerally with, “I COULDN’T GIVE THAT UP!” I usually wind up choosing that thing because I’m obviously a bit attached to it. It makes for a pretty penitential Lent once you get to about week 3 or so.)

Don’t forget to check out the other entries in Worth Revisiting Wednesday!

Lent, these days, seems to be more about doing something extra rather than giving something up. While it is always good to do something extra (say a daily Rosary, go to daily Mass, pray the Stations of the Cross on a regular basis, etc.), it is still important for us to remember that Lent is also a time of sacrifice.

A long time ago, not only was there fasting on Ash Wednesday and Good Friday, there was no meat or dairy eaten for the entire Lenten season. “Oh, we can’t eat meat on Fridays!” Well, really, we shouldn’t be doing that all year long anyway. Yes, you read that right. The Friday penance wasn’t lifted. It was amended, however, to say that if you ate meat on Friday, you should do some kind of penance instead. I know, I know. I didn’t hear that at all growing up, and I actually told people that it had changed. Vatican II, you know. Just like Vatican II says to turn around the altar and stop using bells at Mass. (Can you guess that it doesn’t say that, either?)

Anyway…once upon a time, there was no meat or dairy at all during Lent. Now, I have to say that if I did THAT, it would be a very long Lent. I don’t think the family could go the whole time without meat (and certainly not without dairy! I have growing girls, you know!), plus I’m not very keen on cooking two sets of food for every meal.
So what to do for Lent? I was pressing the girls to think of something to do, but then heard Al Kresta discussing how his wife would just pick something for the kids (still does), and that his older kids are now starting to add to whatever mom picks for them. Hmmmm…
When Hubby decided two years ago to give up something for Lent, he mentioned his derth of ideas. Knowing what a chocoholic he is, I said, “How about chocolate?” (I’d actually been fasting from chocolate for nearly a year by then.)
His answer was, “I CAN’T DO THAT!“
To which I said, “Your answer kind of points to that as the best thing to give up, sweetie.”
So he gave up chocolate. Not easy for a man who puts chocolate syrup in his coffee and occasionally eats chocolate chips right out of the bag, you know. (I think he learned that last one from me.)
What we give up is supposed to be something we really like. We’re not supposed to give up brussel sprouts if we don’t eat them, cigarettes if we don’t smoke them, or running if we don’t step foot outside to go anywhere unless it’s in the car. Lent is supposed to be a stretch. The sacrifice we make is supposed to help us to live the First Commandment better. Don’t think you can give up coffee for 40 days? Not even for God? Are you sure you’re not making it a god?
Our family will be, collectively, giving up chocolate. Hubby finds this really hard, year after year. I will find it difficult, too, especially since I started eating chocolate a year ago Christmas after having none of it for about 18 months. (Hey, yogurt is WAY yummier if you put chocolate chips in it! And have you ever had a peppermint mocha??) The girls aren’t keen on my idea, Big Girl less so than Little Girl. All of Lent without chocolate milk? Without chocolate chips for the yogurt? Without ice cream with chocolate? (This is better than Big Girl’s first ideas, which are usually giving up school or giving up sleeping with Baby. Little Girl can’t get any ideas except for giving up using straws.)
So, as you are considering Lent, remember that it is definitely a fine thing, a very good thing, to do something extra. We’ll try to make it to daily Mass, say a Rosary daily, pray the Stations of the Cross every Friday (did you know there is an indulgence for that?). But sacrifices made for God, sacrifices that will help us to place God more at the center of our lives, are also very good things. And a difficult sacrifice makes for a better offering than one that takes little difficulty to make. It’s the difference between a child going to his father with a Father’s Day gift he made by hand over several days and another going to the same father with something he borrowed $5 from mom to pick up at the store Saturday afternoon. Will the father love the child who grabbed something from the store less? No, but the hand-made, time-cionsuming gift might be a bit more pleasing. It has more meaning to it.
Consider your sacrifice as a gift to you Father, and put some effort into it! Stretch! Make it hard! When it’s all over, you’ll be happier with yourself than if you did something small and easy.
Text and images © Christine Johnson