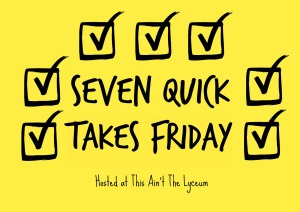 Welcome to Seven Quick Takes, hosted at This Ain’t the Lycium! I haven’t done this in so long that I’m not completely sure I remember how. Be sure to go check out the link-up and see posts from people who know what the heck they’re doing.

I’ve been writing a lot lately. As in, I have posted every day for about a week and I added a few thousand words to my book. And I keep getting ideas for things to write about! I even got this idea just before Mass on Sunday, so I whipped out my iPhone and jotted it down in Evernote so I wouldn’t forget.

Well, I did forget, but it’s written down, so I can find it again later and actually write it. I’m sure it will rivet all 7 of my regular readers.

Since I started writing again, I’ve also started to try to take my prayer life more seriously and make more of an effort not to be a total failure at my few required things as a Dominican. It’s super-hard to get to daily Mass right now, so that leaves me with Lauds and Vespers and a daily Rosary. I was terrible for a while, but I’ve been back in the groove with morning and evening prayers, at least. And I’ve prayed more Rosaries this month than last, so that’s better, right?

I know I must be doing better and growing, because those stupid night terrors I get (which I have a strong suspicion to be spiritual in nature) have come back. I’ve been praying hard as I go to sleep that I’m protected from them, and as of writing this I’ve had three nights without. (That probably means I’ll get one tonight. yay.)

I have noticed for a while now that whenever my spiritual life gets on track, I get these night terrors: seeing people standing over me, lunging at me … it’s pretty scary! Lately, I’ve tried to offer them up and accept that when I am growing in my spiritual life, I’m going to get attacked.

On a slightly related note, it might interest you to konw that I was terrified of the dark until I was 19 years old. That was when we moved, and I played this mental trick on myself that the scary stuff I was afraid of in the dark did not follow me froim New Jersey to Florida.

I’m not completely off-track in homeschool, and considering that we’re finishing week 6, I think this is a great accomplishment! Our schedule has been a little weird this year, with odd interruptions because of … 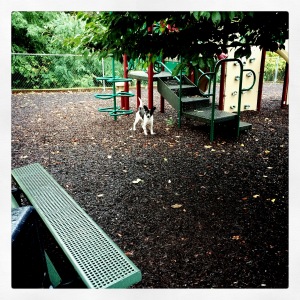 … Frodo Waggins, our puppy. He’s almost 5 months old now, and he needs a LOT of attention. Also, as bright as he is (he’s part beagle and part border collie), he’s not bright enough to know that if he’s tired he should go in his bed and lay down. I have to make him to go bed (in his crate) and close the door and put the cover on it and ignore him so he’ll take a nap.

And he needs a LOT of naps, or else he gets bitey and stuff. (See my post here on his “fun” side.) Honestly, it’s a little like when my older daughter was a toddler, only he bites more than she did. 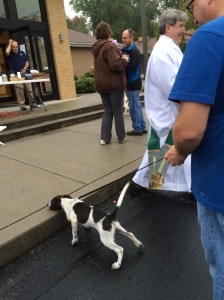 We had him blessed, but it wasn’t a full exorcism. Still a crazy puppy.

But he’s a sweet dog when he’s not manic, and he wants to be good. Earlier this week, my older daughter took him outside when it was dark so he could do his business, and a runner went by with his headlamp and flishlight. It freaked out the poor pup, and he started WOOFing as deeply as he could to ward off the scary light thing in the street.

He’s also taking obedience classes with Nathan, so he’s learning how to be a good boy. As long as we have treats. But he’ll get there. When he’s good, he’s very, very good. But when he’s bad, he’s horrid. 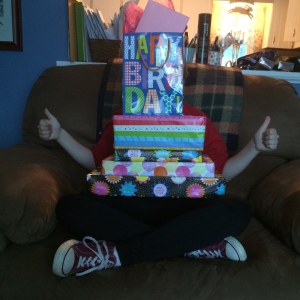 Another reason our schedule has been wonky is because my older daughter, who turned 17 yesterday, got her first job at Starbucks! In addition to her school load, she is also working part-time, and since she doesn’t have her license, I’m driving her to and from work. It’s expensive, not because of gas, but because I’m getting something when I go in.  I don’t have to do that every time, but the last couple of times I wanted to go and write (see number one!) while she finished her shift.

But she’s getting some real world experience, and her maturity is about to take off. She’s learning to juggle work and school, and has already learned that sometimes she has to do school when the rest of us are watching a movie or something fun. I’m also hoping that it’ll help her learn to manage her time better.

Oh, and her Instagram feed is hilarious lately. Nearly every shift, she has put up a picture representing something from her shift, shown via facial expressions. She cracks me up! 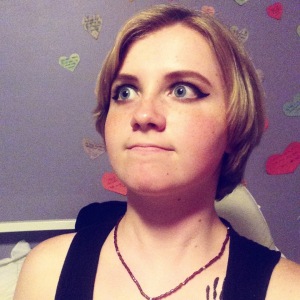 My husband found these, and I love them! They’re so silly, and for some reason I kept thinking of Jen Fulwiler when I watched them. I pictured the two ofus making comments like this and sounding totally strange. I try to talk this way simply to embarrass my kids, and it usually works. (Don’t worry, Jen, it’ll come soon enough. Your kids are still too little to really embarrass them!)

The best thing about them is how hilariously awful they sound, talking like teens do online! I know I sound that ridiculous (and, frankly, so do most teens when they say the things out loud that they hashtag online). but I can’t get enough of them. 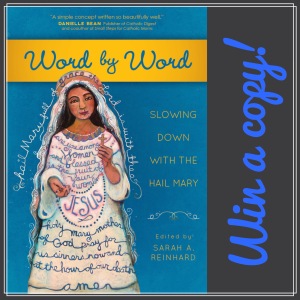 Have you entered the giveaway I’m having this week? You can wi a copy of Word by Word: Slowing Down with the Hail Mary, edited by Sarah Reinhard and featuring a bunch a terrific Catholic writers … and me! See details and a link to enter at this post. As of this writing, there aren’t many entries, so you have a really good chance to win! Enter here, if you want to skip the post. And tell your friends! (Come on, don’t be selfish.)