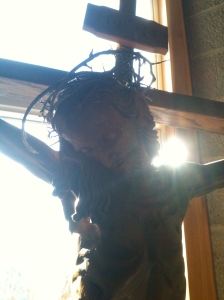 There are some Catholics who are so bent on finding things wrong with our pope that they’ll jump to the first conclusion (usually wrong) to be able to complain publicly about him. They’ll stick to it, and if it turns out that they’re partially right, they’ll still refuse to give Peter the benefit of the doubt. I, for one, am tired of it, and will stop following those people on social media. Give the pope the benefit of the doubt, Catholics.

The specific reason for bringing this up? The pope was given a pretty weird gift – which seemed wildly offensive – and his first reaction was a look of horror. Apparently, though, the hammer-and-sickle crucifix was modeled after one that a martyred priest had made before his death. The pope had prayed at the site of the priest’s martyrdom earlier in the day. When the Bolivian president explained what it was, the pope apparently said, “I didn’t know that.” Maybe. None of the audio is quite clear enough. Originally, it was reported that, with the look of horror on his face, he said, “That’s not right.” Later, some people said he might have said, “I didn’t know.” Again, it’s not clear exactly what he said. What is clear from the video is that he looks as offended as I’ve ever seen a pope look at a public event, then he manages to take the gift gracefully, which is pretty much what you would expect from a man who is the spiritual leader of the world. He doesn’t punch the Bolivian president. He doesn’t throw the gift on the ground and stomp his foot on it until it’s broken in a million pieces (which I actually saw someone suggest that he should have done). He didn’t lecture the gift-giver. Instead, he listened to the explanation of why a gift that looks so wildly offensive at first glance would be given to him, then he smiled and accepted the gift.

Because the pope apparently has manners or something.

But I see people who call themselves Catholic who are complaining about the pope accepting the gift, or smiling as he did so. When I pressed that it was being reported that he wasn’t pleased with it, according to reliable sources, I actually got Novus Ordo Watch referring me to Regina Caeli for a “better” translation. I literally laughed out loud at that one!

Look, the audio is a little fuzzy. It’s not completely clear what he said. But NO Watch and RC are bent on showing that our Church is being misguided. They doubt the validity of the Ordinary Form Mass, which has been nurturing souls for more than 40 years, mine included. They’d probably freak out to learn that I’m an Extraordinary Minister of Holy Communion. Or that I wear pants when it’s cold. Whatever.

When I was coming back to the Church more fully and really learning about the depths of my faith, I would chat in Yahoo Message Boards (remember those?) in various Catholic groups. There were a lot of Rad Trads who made such a fuss over The Second Vatican Council being illicit that I started to feel doubtful that I was in the “real” Catholic Church. As someone who was trying very hard to really live by the Church’s teachings, I wanted very much to truly follow the Church. If everything after Vatican II was illicit, I was very worried. I was confused as to what I ought to do, if my parish wasn’t even part of the real Church! Another woman allayed my fears by pointing out one thing that proves the validity of Vatican II: 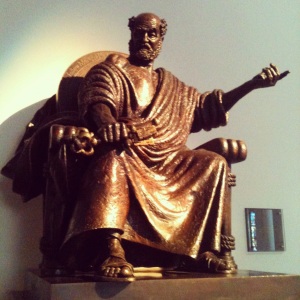 You are Peter, and upon this rock I will build my Church, and the gates of Hell will not prevail against it.

Christ promised that the Holy Spirit would guide the Church until the end of time. That He would never leave us. If that was true, that means that He guided the Church through Vatican II and still does so to this day.

The fact is, if I believe what the Church teaches to be true, and I believe that Jesus is the Son of God, then I must trust Him and His Church. And if I trust God, I have to trust that the Holy Spirit has guided the cardinals to choose Pope Francis as the Vicar of Christ. And if Pope Francis is the Vicar of Christ, I am going to give him every benefit of the doubt as pope — especially publicly. Doing otherwise only tears the Church down, whether you think it does or not. It causes division in the flock. And it shows great disrespect for the successor to Peter. So if you’ve been doing this, cut it out. Pray first, post later. And stop looking for reasons to tear the pope down.

Photographs in this post are copyrighted to Christine Johnson.

3 thoughts on “Hammers, Sickles, and the Benefit of the Doubt”