Once upon a time, there was a little girl who was very, very sweet — but also very, very shy. People made her nervous, and she considered strangers to be very scary, indeed. Her mother knew what it was like to be so shy, so she tried to help her to be brave and to learn how to be Out in the World and to Talk to People. Making Friends was hard for her, but her parents helped her learn how to do it.

This girl was very musical, and she loved to dance, so her mother and father enrolled her in classes for ballet and tap dancing. She loved the class, but rarely spoke to anyone there. She would shyly hug her teacher good-bye after class, but it took her until the middle of her second year of dancing before she could just talk to the teacher without her mother being next to her. She would watch her classmates and listen to them as they all chatted together, but she was very nervous about Making Friends by herself. If her older sister were only there, she could be brave and talk to the other girls — allowing her sister to start the Small Talk with the other girls. But her sister wasn’t a dancer, so she couldn’t help the little girl.

One day, to her mother’s great surprise, the little girl said, “I have finally decided who I think I want to be friends with at dance class!” The girl was very proud of herself for being ready to Make Friends all by herself, but her mother was surprised that she hadn’t already done this! After all, she had been dancing with this same basic group of girls for nearly four years now. Surely she hadn’t been quiet all through those years! “No, Mommy, I have talked to girls some. But I think I know who can be my Special Friend now.”

The little girl’s mother smiled and encouraged her to Make Friends with whomever she chose.

As she grew up, the little girl became a very good dancer. Many of her classmates would perform in solo numbers, or in duos and trios, and even though it was expensive, the little girl’s parents asked her one day if she would like them to save up for her to dance in a solo. The girl stared at her parents with a horrified look. “Oh, NO!” she exclaimed. “I couldn’t do a solo!” And they knew that even though she had become very brave and could Talk to People more, at heart, she was still the same shy little girl.

In the middle of her seventh year of dancing classes, the little girl surprised her mother and father and told them she had been saving up her money to pay for the lessons needed for a dance solo! It was a lot of money for a girl to save — $300! — but she was determined to save it up and pay for the private lessons. Her parents encouraged her, and her grandparents sent her money for her birthday to help her save up the necessary funds. Just before her eighth year of dance lessons began, the girl had saved up enough money to pay for her lessons, and she proudly told her tap instructor that she would like to begin her lessons that November!

For six weeks, she went to tap class early to learn her new dance, and every night she would start the music on her iPod and practice her number. When the six weeks were up, she had learned the entire solo, and she worked to hone it to perfection. Her teacher asked her if she would like to take part in a dance competition, and she promised to think about it. Dancing the solo at the recital was one thing; dancing the solo for a panel of judges who would be looking for every tiny mistake was something else.

After considering the offer, the little girl (who was, by now, not so very little) said she would participate.

Her parents were amazed at the bravery of their little girl (who would always be so to them). Could this be the same girl who was so afraid to Talk to People in her dance class once upon a time? They gladly paid the fee for the competition and marked the calendar with the date.

On the morning of the competition, the little girl, her parents, and her older sister all woke up very, very early and left home before the sun came up. They drove for hours to arrive at the hall where the competition was being held, and the little girl and her mother carried her costume and makeup backstage to get ready. Her father and sister sat down in the audience and waited for the dancing to begin.

Backstage, the girl and her mother did her makeup, and the mother carefully removed all the curlers from her hair. The girl put on her costume, and she was finally ready to go. “I’m so nervous. I’m not on for 40 minutes, but I want to go backstage now!” she said.

“Before you go, let me take your picture, and then I’ll go wait for your number,” her mother answered. “Stand there, pose, and smile.”  She snapped the picture, hugged her daughter, and said a quick prayer over her. “Father in Heaven, help her know that she can do this. Help her to use the talents You have given her, and let her do her very best today. Amen.” 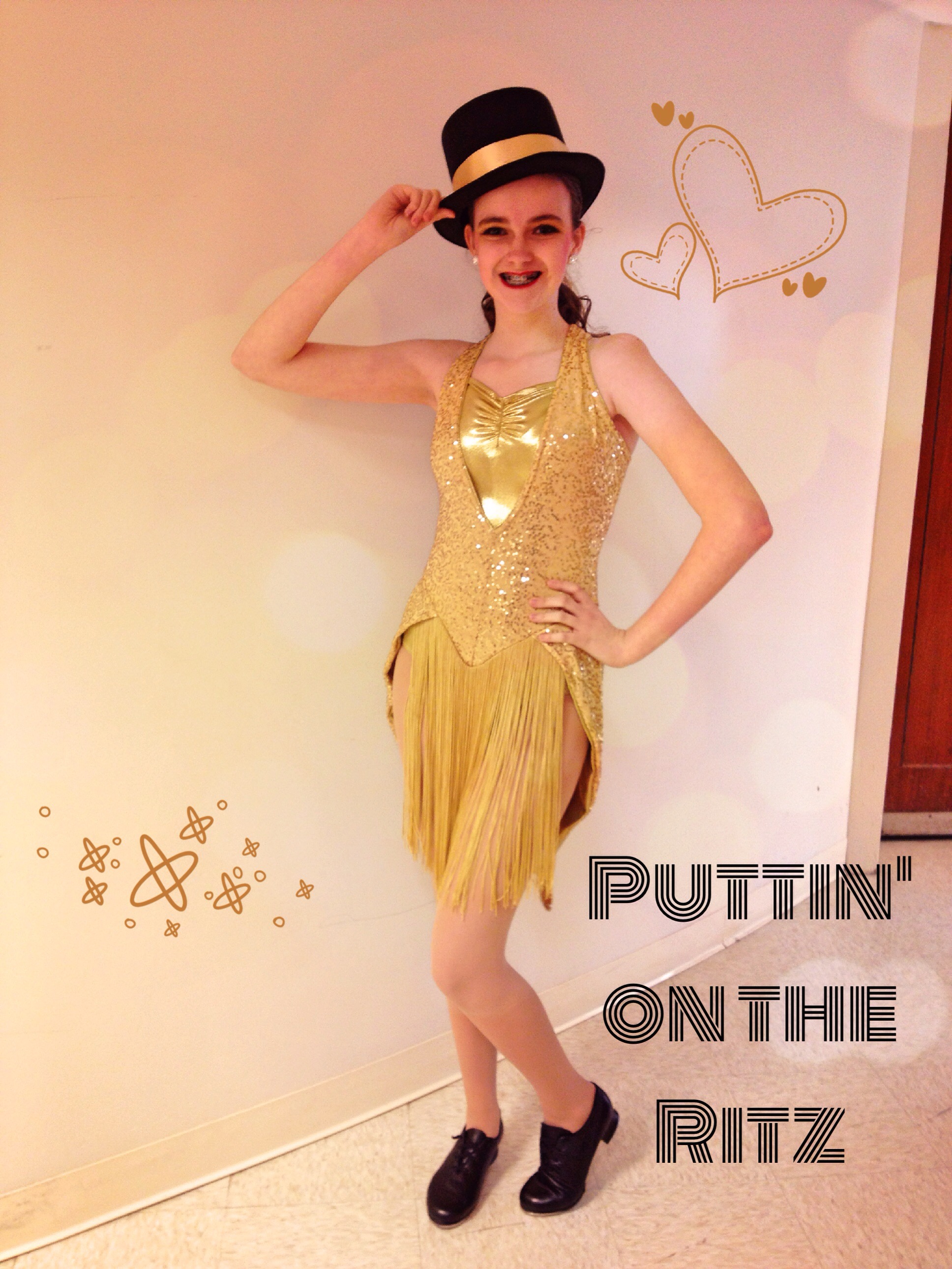 With that, they parted ways, and the mother went to sit in the audience by the rest of the family.

It was still early in the day, and it was oh, so hard to wait for dance number 21! The girl’s mother was terribly nervous for her daughter, and when she saw another girl — someone else’s daughter — freeze up after forgetting part of her solo, then rush from the stage in tears, she almost cried. “Please, God, don’t let that spook my little girl!” she prayed.

Finally, it happened. The announcer said, “Number 21: Puttin’ on the Ritz!” and the music began.

Out strutted (strutted — she really strutted!) the not-so-little girl. She smiled, she pranced, she tapped across the stage and back. She hit her marks! She even winked at the judges! Her mother’s eyes filled with tears as her daughter performed, and when she was finished, her mother and sister rushed backstage to congratulate her. When they finally met on the stairs that led to the dressing room, they embraced, and congratulations were passed out from both family and fellow dancers.

Then came the hard part: waiting for the awards ceremony.

When it was finally time, the girl went back on stage to wait with her fellow soloists. She had competed against five other girls in her age group, whose hours of dance matched her own (recreational, as opposed to competition). Two of those girls in the group were from her own class, and they sat together, unsure how they did. Before they could announce the winners of each age and level, each dancer learned what general area their dance qualified for: gold, high gold, or platinum. The little girl and her two friends all got the highest level of points: platinum! Once this formality was over, the announcer explained that they would only announce the top three for each category; the rest of the dancers could see their scores and placement online that evening.

It seemed to take forever to get to the Right Category, but finally, it was time. “And now,” the announcer began, “for the teen recreational category.” Third place was announced: number 22. It was one of the girl’s own friends! They hugged, and the third-place winner went to receive her trophy and stand at center-stage. Second place was announced: number 19! The other girl from the same dance class had won second place! More hugs, and the second place winner soon stood center-stage with her trophy.

In the audience, the girl’s mother held her breath. Other girls — girls from other studios — had also qualified in the platinum category. No one could tell if the shy girl had even placed, but there was a chance… “No,” thought the mother. “I’m afraid to think it. I’m afraid to say it out loud.” So she held her breath a little more and clasped her hands together. No matter what happened in the next 30 seconds, she was terribly proud of her little girl for doing what she had done that morning.

The moment came. “First place goes to number twenty…” (oh my God could it be true? did she do it) “…one! Puttin’ on the Ritz!”

And that’s when the girl’s mother started to cry. They were tears of joy. Tears of relief. Tears of pride.

Once upon a time, there was a little girl who was very, very sweet — but also very, very shy. People made her nervous, and she considered strangers to be very scary, indeed. Her mother knew what it was like to be so shy, so she tried to help her to be brave and to learn how to be Out in the World and to Talk to People. Making Friends was hard for her, but her parents helped her learn how to do it.

And she went Out into the World and just shined.

One thought on “The Story of the Shy Little Girl”