I’m writing at CatholicMom.com today in the Tech Talk area, and I have a review of FlipBoard this month, which is a visual feed organizer that has various ways to share the information you find.

Google Reader is now gone for good. At one time, it was the main way I kept up with blogs and news online. Then came Facebook and Twitter, and I gradually began to use these venues more than I used my computer-based readers. This was especially true once I got an iPod Touch (and, later, an iPhone). Even though there was a way to access Google Reader through iOS, it felt clunky.

However, I discovered Flipboard, which is an app available on both iOS and Android, which not only allows you to follow different blog feeds, but also lets you keep track of your Facebook, Twitter, Google+, and other social media accounts. It’s presented in a kind of visual magazine. The opening screen of the app presents you with “Cover Stories” at the top, with a photo from one of the top stories pulled from all of your subscribed feeds. 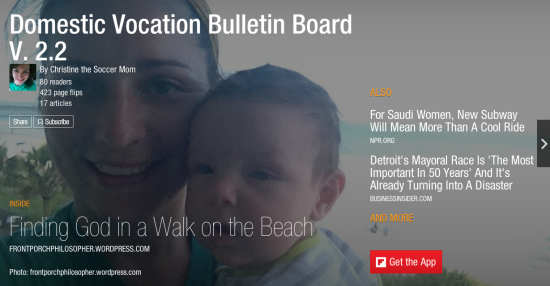