I’m turning into a real artsy-fartsy, homemaker kind of gal lately. I’ve got a bread machine, I made homemade chicken stock, I’m cooking up a storm, and now, I’ve started to make clips for Little Girl’s hair.

I can’t take credit for the idea. It came from an old book on how to braid hair in different styles and how to make simple hair accessories (from scrunchies to bows).
This morning, while I drank my coffee let me coffee go stone cold, I made a balloon barrette for Little Girl (who, aside from me, is the only one with enough hair to wear it). I got the clip part from Wal Mart and the balloons from Dollar Tree. I figure the clip cost me about $1.50 to make, since the clip came in a four-pack and I didn’t use all of the balloons from the package.
First, I decided on a pattern. I wanted to go with a rainbow effect. Roy G. Biv! Oh, no purple. And I have pink. So … W. Proy G. B.! Hooray!

Then, I simply opened up the clip and started tying balloons on. I alternated which direction the opening was on so it was a little more balanced.

I also had to be careful to stretch the balloons so they’d be big enough to tie. 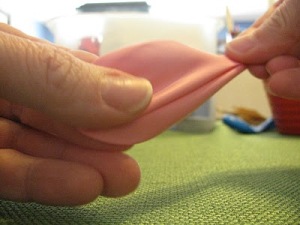 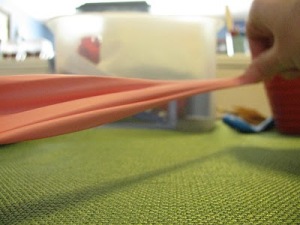 I decided that one W. Proy G. B. was not going to cut it, especially with that white piece. I cut the white balloon off, slid everything down a bit, and went with a PROY G. B. G. YORP pattern instead. (Say THAT five times fast!)

Little Girl helped me out with holding down the clip (alas, our hands were all busy at the time, so no pictures, but I’m sure you can imagine), and then we sat her down to pull her hair back in her new, colorful, goes-with-everything hair barrette!

One thought on “Simple Crafts: Make a Balloon Barrette”