1. We’ve been really cranking in school lately. We’re back on track and have been doing really well as getting school finished for the most part. The girls have done multiple projects that they’re proud of, too. Little Girl did a diorama of the Tranfiguration that she gave to Fr. K. as a gift last week. I took a couple dozen pictures of it, but I’ll spare you most of them and give you just a couple of shots here. 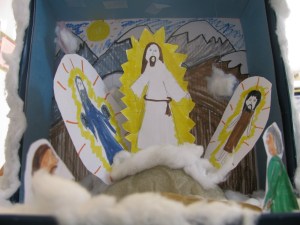 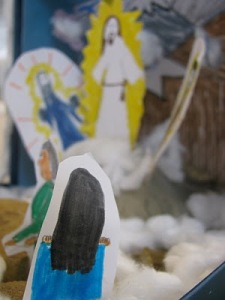 2. Big Girl wrote a pamphlet about the Six Laws of the Church. Here are shots of the PDF version of her project. She wrote and illustrated it, and only got help from me on a few finer points and some page layout. (I asked her to clarify a couple of things in her writing.) 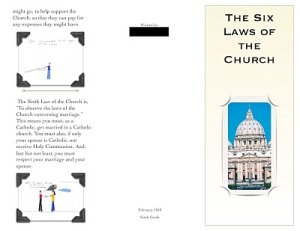 3. Travel Man is getting his Super Suit out of the mothballs next week. He’s out of town two weeks running. Pray for him if you could; he’s having a very busy and hectic month. We see a couple of three-day weekends coming up where all he does is sit at home with us and nap. I’m all for that.
4. I’m not sure if it’s really sunk in that we’re debt-free except for the house. It kind of hit me early last week when Travel Man told me about his bonus – bigger than expected! – and I burst into tears. It occurred to me that we had nothing to spend it on. Well, I mean, we have projects and stuff, and we used most of it to open a money market and jump-start our emergency fund (6 months of expenses socked away). But as for bills … we were more than caught up. We bought the girls mattresses for their bunk beds (which they really needed!), got their bathing suits, joined Weight Watchers (both of us), and rejoined the YMCA. But we didn’t need to pay anything else off. That’s the first time since we’ve been married that his bonus money wasn’t earmarked for debt.
I can’t wait to call Dave Ramsey. I just have to wait for a Friday when Travel Man can be home while Dave’s on the air.
5. Big Girl is getting … well, big. But she’s also not really a girl any more. And it’s really obvious when you look at her. She even got a really cute haircut yesterday – it’s got layers! – and she is getting to really be a young woman. I’m excited for her, but sad, too. Sad for me. I can’t believe that this little baby girl: 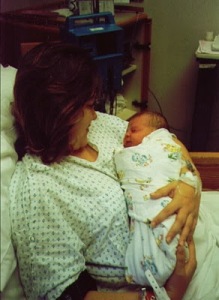 Is now this young woman:

6. Speaking of growing up, Father K. gave a homily on priests needing to teach about hard things – hard teachings, as it’s usually said. He said he gave a talk to the tenth graders at the local Catholic school, and then he mentioned the following things by name, calling them evil.

THEN he said that it isn’t just hard for teens to hear things. That adults have to deal with things that our culture promotes as not only okay, but good. And he mentioned by name:

cohabitation, contraception (again, “even inside of marriage”), adultery, divorce and remarriage

Hands up, Catholics. How many of you have heard ANY of those things from the pulpit during a homily, let alone ALL of them AT ONCE, and being called intrinsically evil?
Have I mentioned lately that I love our new pastor? I love that he’s unafraid to teach the hard things.
Pray for our priests, that they all have such courage!
7. Recipe time! This time, I have two recipes for side dishes. I’ve posted both on Weight Watchers and Tasty Kitchen, and they’re both really good for Summer (or for fasting). Yes, I said Summer. First up is Mac Daddy Salad*, my father’s recipe for macaroni salad. Next is my own Homemade Pico, which I made in response to Travel Man always wanting to buy pico at the grocery store. I looked at it one day and said, “I think I can make that.” One year later, I did.
*Just in case you can’t get to that recipe (it might be members-only), here’s the Mac Daddy Salad link that’s on this blog.
[image source: icon]